From racism to equality: seeing what we have in common

I find it difficult to see a child like this and to understand why anyone would think that the color of one's skin has anything to do with who they are or how we should value them. The truth is, we are all just vulnerable human beings living on this planet together. The most intelligent thing we could do is work together to create a world that respects everyone and treats everyone equally. And yet, we allow this idea that people are not equal to divide us. 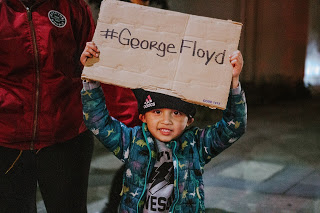 Racism has existed in America from the beginning. In the United States, racism is a systemic cultural issue. America has always had a strong racist current since the time of slavery, since the beginning. In that day and time, dark skinned humans were viewed as lesser beings, with few rights. They were the property of light colored people, like a table or a chair. How did this ever become reality in our great country? The country and the world were different then, so much different from what we know today. The truth is we've made a lot of progress, but we also have a long way to go.

We continue today to drive inequality right down at the roots of society, in our education system, for example. Our education system today creates a disadvantaged population, generation after generation, mostly made up of the so-called people of color. Even this term is racist. Every human is colored. To understand how this system creates such disadvantage, we need only look at the funding model. It's all about the money, who decides how money is spent, and what it buys? What is money? What is its function in our society? In a capitalistic society, money translates to capability. More money translates to more capability.

In the U.S., we fund schools through property taxes. Those who decided this were fully aware that poor neighborhoods have far less tax base, and therefore would have far less money for education than wealthy neighborhoods. This funding model systematically and with intent, creates a reality of inequality, an imbalance in capability, ensuring that a segment of our population gets less money and will be disadvantaged forever. This is the starting place for change. We must begin at the ground level, acting on this basic intention.

The irony is stark, given the Constitution of this country and its Bill of Rights. All men are created equal is just a sentence with nice words. Words are words and actions are actions. Sometimes words become intentions, and still they are not reality. Words become reality only when they transform into actions. America has never lived out the intention of these words and has instead lived out the actions of a racist nation.

How did we get here? The origin of racism goes back a long ways, and I won't attempt to cover that in this blog. What I will say is that no one, on human is born a racist. Humans are taught racism. They are taught racism by their parents mostly, and by the environment they live in while growing up. This is where we must focus our efforts, as well as on the institutions that continue to create disavantage for some and advantage for others.

Now, perhaps, we can turn from our past and make real change. But this must include real systemic change like deciding as a society that every child in our nation deserves and gets an education funded by the same amount of money per child, so that our schools have the same quality of teaching, of buildings, and of supplies, for each and every child.

Until we see each and every child as equals, as our Constitution declares, and until we change our fundamental systems to act on this belief, we will never reach our potential, nor the dream that has captured the hearts and minds of people worldwide. This is how we can create a new nation, a truly great nation, one that lives out the idea of equality. This is how we can revive the American dream, through actions that bring equality to life. This is the first and most important step. Everything else is just words.